Focusing on the southern Chinese province Yunnan, Cheng Xinhao (b. 1985) is interested in the natural and social forces that shape a place. Though Cheng earned a PhD in chemistry in 2013, he immediately afterward turned to becoming a photographer. His first book The Naming of a River was shortlisted for the 2016 Aperture First Photobook Award. In this interview with GUP, Cheng explains how doing science influenced his photographic approach and how he tries to show the many sides of an issue, rather than a single view.

We meet in a café in Kunming, Cheng’s hometown as well as the setting of his first photobook, The Naming of a River. The book is named for the Panlong River, which flows through Kunming, and has a formative presence in the city. Showing cross-sections of the river’s geology and samples of the water and earth, the book appears at times more like a geological study than an art project. Cheng uses a mixture of landscape, portrait, collage, and object photography as part of his method. “I feel like,” Cheng says as he orders coffee, “if I would only use landscape photography, or only portrait photography, I would be simplifying the complexity of the situation.” 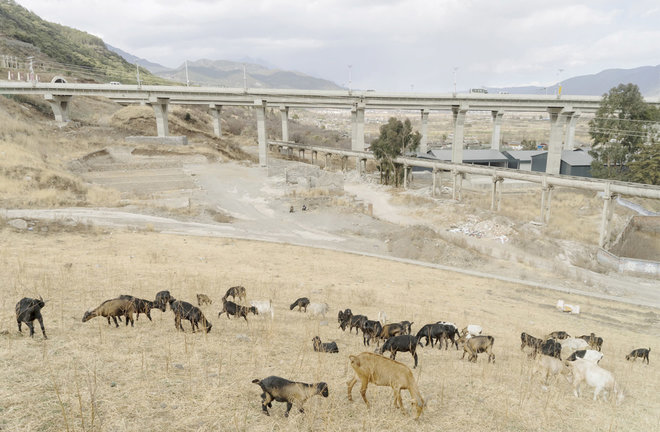 Doesn’t photography always simplify the complexity of a situation?
I hope not! With this diversity of methods I actually try to retain the complexity of an issue. I always think hard about how I want to approach a topic. Each time I go to a new area, there will be a period of time in which I don’t take any photographs, I’m just getting to know the place. I have a feeling that if I would start to take photographs right away, what I would photograph would either become very superficial with the gaze of an outsider, or the act of taking photos would be a lot like hunting. I’d rather design a framework first. Only when I’m satisfied on the level of the framework, do I start to actually take photos. That happens according to a very exact outline, I will tell myself: I need a picture that does xyz, I need a picture that does abc. When I take a photo that can fulfil this requirement I tick a box. I always have a list to check on my phone.

A moment is never really just one moment in time, it’s many, because there are many processes happening simultaneously

How do you decide when your list is complete?
For example, for my new project Time from Different Sources, which focuses on urbanisation in a village called Ciman, I was thinking of a way to explain how the village had changed in recent years. I had already photographed the new highway bridge that was built over the village, I had photographed buildings and the fields around the village, and I had portrayed the people and animals in the village. But I felt that I hadn’t captured the change to urbanisation well enough. Then I found out that for hundreds of years pear trees were planted in the village, and that they had stopped doing that. Recently the last two remaining pear orchards had to make room for a stadium and a five-star hotel. I started thinking: this must have consequences for social life in the village. 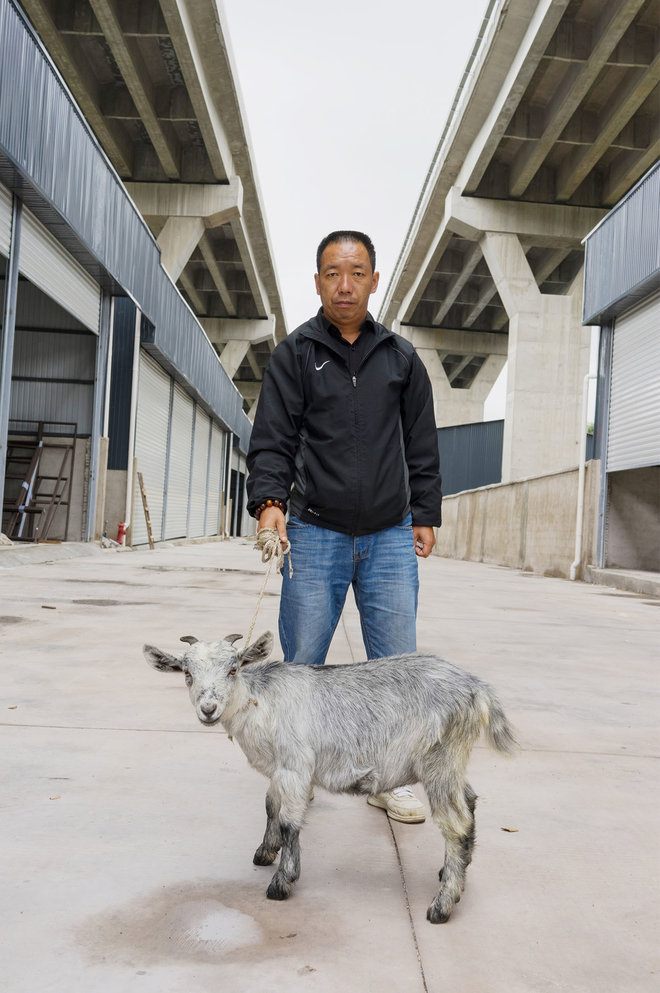 The traditional way of building a house in this region is that one generation builds one room, then the next builds one that is positioned at a right-angle to it, until, after four generations, you have completed a courtyard. And people always used pear tree wood for these courtyards. So that traditional way of building a family house had stopped, too. I photographed a few old, dying pear trees, and I showed a courtyard in which the last room was built with concrete instead of wood. Only then I started to feel that I had sufficiently looked at what had changed and what had disappeared in the village because of urbanisation.

What answers have you found so far about urbanisation in these Chinese villages?
As you know, urbanisation is very widespread in China. But then again, urbanisation happens in very particular ways in particular places. Before I started working on the topic, my idea of urbanisation was fairly absolute. I thought it was basically a struggle between the city and the countryside. But what I found out in Ciman village was that different systems were gradually replacing one another, and that they were also happening simultaneously. The only way to show this, I think, is to use a polyphonic narrative, which means that you show that different processes are happening at the same time. For example, very little is left of nomadism. But in many places you will still find one or two families herding cattle. They’re co-existing with modernity. In tourism you can also see that several processes are happening simultaneously: yes, the city is expanding, and the farm fields are disappearing, but the farm villages themselves are being preserved for touristic purposes. So even though there are major changes in these people’s lives, because for example a lot of people had to leave these places, the buildings themselves in the village might change less because of tourism.

You took an image called 16 Villagers and One Passed Away, which is a collage with a panorama photo of a street, with different images of people and animals taken at different times added to the photo. Could you tell us more about this image?
I hope that in this image we can see the passage of time, or the ‘happening’ of time. What I’m trying to say is that a moment is never really just one moment in time, it’s many, because there are many processes happening simultaneously. In this collage I’ve intentionally glued the pictures together in a sloppy way, so that you can see that these people and animals were not captured in one photograph, but in many. Also, in the picture you literally see people in different stages of their lives: from a toddler on the very left side to a deceased person on the right. 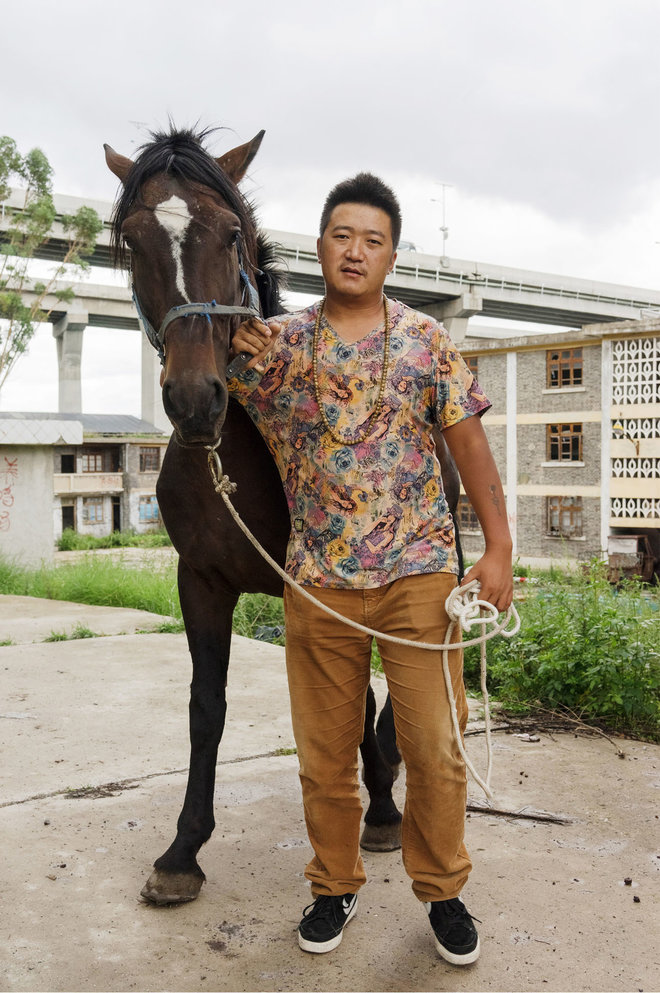 Tell us more about the portraits you take. Do you plan these portraits beforehand?
Portraits are actually the only photos in my series that aren’t planned. I need real interaction with a person before I take their photo, so I don’t advertise for the portraits, I simply meet my subjects in the streets. For example when I photographed the beekeeper in The Naming of a River, I wasn’t planning on photographing him at all. I was just photographing the river and, since I needed to cross the river, I started wading in. But I got to a place where the river was actually flowing very fast. And when the water was up to my chest, there turned out to be a very strong current. It was at that point that I noticed that somebody was looking at me. It was the beekeeper. He shouted: ‘What are you doing?’ I said: ‘I wanna cross the river.’ And then he said: ‘If you wanna cross the river why have you picked the deepest spot?’ So that’s how I met him. He directed me to a place a little ways back where I could easily cross, and it was much shallower. After I had crossed the river, I found out that he was carrying a beehive. So I started talking to him and visited him several times afterwards to take his picture.

You photograph dying traditions and changing societies, yet your work doesn’t feel nostalgic. Is this intentional?
My motivation for doing these projects, for thinking about these projects, has in fact very much to do with the fact that I’m from Yunnan; I feel an identification with this place. But I’m not taking photos to express my love for this place, even though I feel that love. I try to ban myself and my emotions from my project, and I try instead to use my emotions as a drive to work.


You earned a PhD in chemistry in 2013, but you started to be a full-time photographer soon after that. How did your experience in doing research influence your photography practice?
The most valuable thing that I learnt from my studies in science is the ability to problematise things. Now, when I do a project, I still ask myself: is this or that question a significant question? And is my method the right one to answer this question? Is photography the right medium for this question? That way of always questioning my methods is a very scientific approach, yes. Another thing that I valued in science and now continue to use in my art practice is that doing a photo project often includes admitting that my assumptions about a topic were wrong. When I actually go into the project and get to where I need to be, I will usually find out that there are many things that turn out to be different from what I had imagined. And that is precisely the outcome that I need. 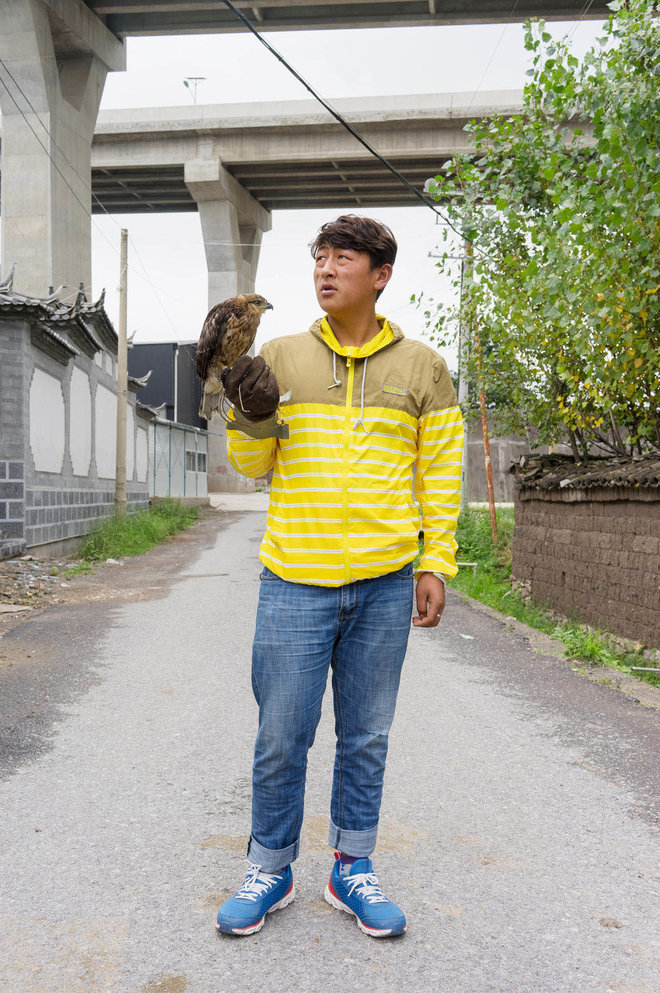 Do you get as much satisfaction from the answers you get from your art as the ones you got from your scientific research?
They are different kinds of answers. The ones you get in science are answers you need to be able to express conceptually, and the answers you get in art are more to do with one’s perception of a topic of place. Yet, a really successful work of art is something that you cannot approach based on your experience to date. A new work of art can in fact destroy what you thought before, and by doing so, it proposes new ways of looking. So after all, it’s not as if art and science are complete opposites. Art creates new knowledge, too.

Time From Different Sources will be published by Jiazazhi Press in April 2017.
Find more of Cheng Xinhao’s work on his website.