Era Mare: Venice vs The Sea

Era Mare (It Was Sea) addresses the most recent floods in Venice (Italy), initiated by photographer Matteo de Mayda, graphic designers Andrea Codolo & Giacomo Covacich (Studio Bruno) and Francesca Seravalle, who curated the project - in a spirit of solidarity with the Venetian inhabitants who have been affected by the floods between 12 and 28 November, 2019.

On the night of November 12, the tide reached 187cm above the main sea level: an exceptional event that submerged the streets and flooded nearly every ground floor in the city. A research by the American non-profit organization Climate Central concludes that Venice will be an underwater city by the year 2050, due to climate change. An urgent situation which we, GUP, think deserves wider attention and so we contacted the initiators of Era Mare. 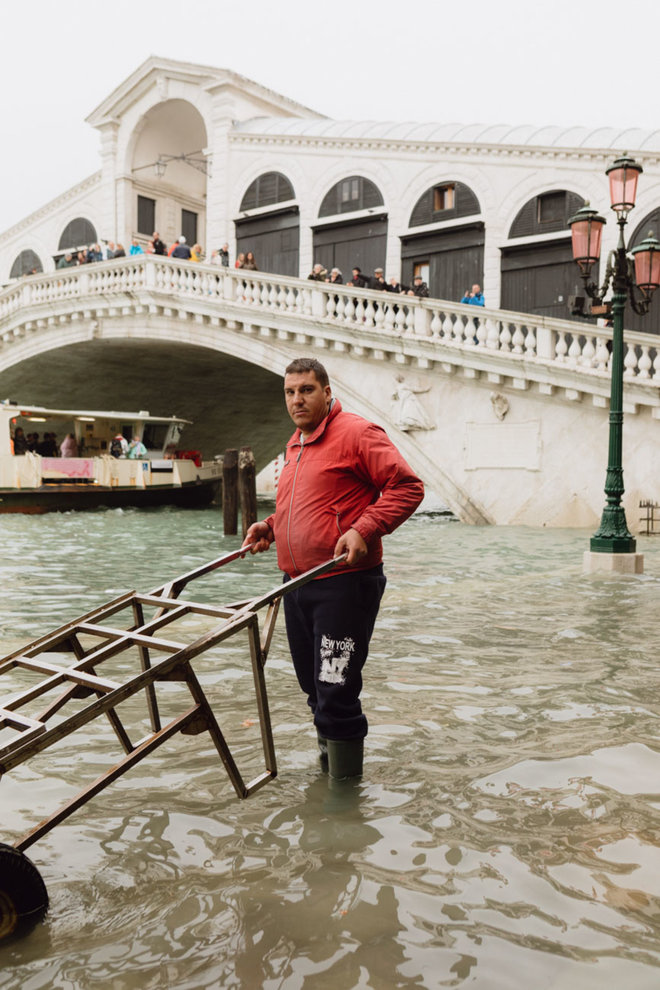 Matteo, can you please tell us what exactly happened on November 12?

The high tide of November 12 had already been publically announced, but what was not yet known was the height of it. That morning, I imagined to be in the year 2050 photographing a city where high tide is a normal event, nothing extraordinary. Then the same evening the tide unexpectedly rose to 187cm, the highest since the disastrous flood in 1966. The canals of Venice looked like a flooding river. For the locals, it felt like the apocalypse.

Most pictures of an event like this commonly show the catastrophic consequences of the situation, while your images feel a bit more detached. Why did you choose this approach?

I don't like spectacular images. As the historian of photography Ando Gilardi once said, "The worst photographic infamies are committed in the name of the 'right to information'." Together with the other authors of the project, it was immediately agreed to avoid the assault report of the damages in relation to the people affected, and instead to show the suspended and fragile atmosphere of Venice, its lagoon and its citizens.

Giacomo, Andrea, how does the design of the book reflect what happened in Venice and Matteo's approach to document it?

Era Mare was born quite spontaneously. Our office bore the brunt of 187 cm and in those days we were able to host Matteo, offering him a kind of operating base to download and post-produce images. So, very naturally, we started to discuss what was happening and how we could tell the story.

The design reflects on a Venice split in half: the book cut in two sections allows you to choose what to see. Once laid out and opened, Francesca’s text becomes available for the reader. 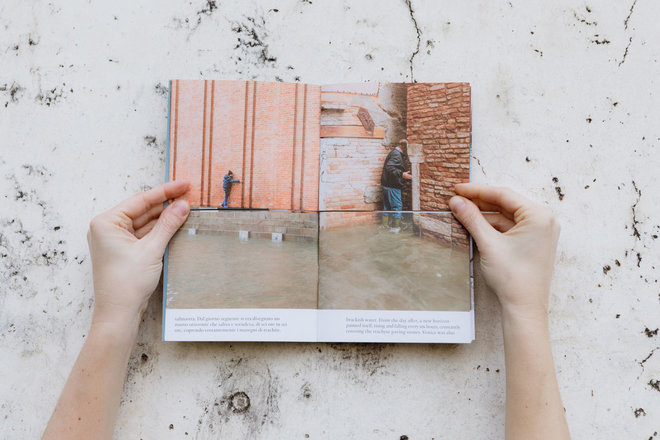 Francesca, can you please tell us more about the concept and the title of the project?

Looking for an evocative combination of words that could explain the radical environmental change (when the lagoon system increased its gradient of salinity), and inspired by the design of the little book cut in half, I proposed a palindrome title that exalted this specular aspect. The words Era Mare (which translates to “It Was Sea”) have in itself a certain musical fluidity that remind me of a wave that comes and goes.

Instead of a dramatic report of the event (the flooding) itself, we immediately agreed to focus on its long-term consequences. Another really important aspect of Era Mare is the aspect of mental stress, to which the Venetians are subject since November the 12th. We feel amphibious. I decided to write a dystopian short story taking ‘The Drowned World’ (1962), a short story by sci-fi novelist J.G. Ballard, as the main source of inspiration. It was my aim to represent the suspended and post-apocalyptic atmosphere in which we found ourselves in November. Despite the despotic narration (image and text) we nevertheless hope to see Venice rise again.

The benefits of this project will be donated to Do.Ve, a network of commercial activities and private citizens involved in the preservation and valorization of a large area of the Dorsoduro district. The association commits to use the raised funds to help these realities get back up again.

Purchase the book at b-r-u-n-o.it