Hand-coloured images of post-Soviet Ukraine: An Interview with Victor Kochetov

Victor Kochetov (b. 1947, Ukraine) and Sergey Kochetov (b. 1972, Ukraine) are father and son but they also operate as a collaborative artistic duo and recently released a book: 'KOCHETOV'. Published by The Museum of Kharkiv School of Photography (MOKSOP) the title reveals the images taken by the Kochetov’s during the 1970s - 2000s, a significant period in the Soviet and the Post-Soviet Ukraine. The publication is part of a project launched by MOKSOP to collect, exhibit and publish work by established and upcoming Ukrainian photographers – other upcoming releases include a book by Jury Rupin, and another by Sergey Solonsky, who worked with Mikhailov as part of the socially-oriented Fast Reaction Group in the 1990s.

How has the artistic collaboration with your son Sergey started?

When a son grows up in a family of an artisan (and I am 100% artisan), traditionally, he helps his father. It was the same in my childhood too. But I don't remember exactly when Sergey started to gain an interest in photography. Maybe he was around 12-14 years old? However, I never tried to exert any pressure on him as I don't have an intention to produce clones. One day, when he started substituting me on the tasks I was given at work at the newspaper - he had just finished school then - it dawned to me that we are co-authors. The editor didn’t seem to care who had made the photographs. It was perfect!

(...) in the Soviet Union we had complete creative freedom because elsewhere in Europe everything is commercialised."

A big part of your photographs is hand-coloured. Could you tell us a little more about this?

The first image that I hand-painted* was the one with the girl with yellow bows. The bows were originally white, but when I looked at the print afterwards, it was just an inner impulse to tint it. Everything was automatic and unconscious, without any long reasoning. In my perception, the photographs that were tinted usually just shifted to another level, became self-sufficient and required no black-and-white original. But all the decisions were made in flow and nothing was planned. 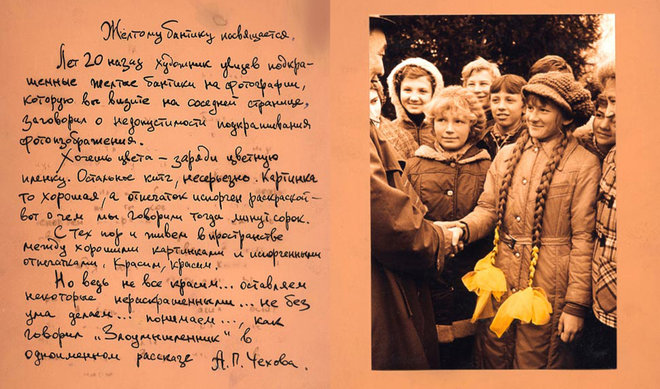 You established deep friendships with other Ukrainian photographers of the Kharkiv School of Photography like Jury Rupin (1946-2008), Boris Mikhailov (b. 1938) and Yevgeniy Pavlov (b. 1949). How did you initially get involved?

Jury Rupin was the one who led me off the commercial path. He told me that there are more interesting things in photography that I rather should be doing. Rupin showed me his reportages and mentioned that there is such a photographer as Boris Mikhailov and that I should definitely meet him. Later on, my son and I had an exhibition with Mikhailov and he took our work for display at international showcases.

Besides them and other people, even good portraits in the advert of the shop on the main street of Kharkiv have had an impact on me, just as the Czechoslovakian magazine 'Revue Photography' by the editor-in-chief Daniela Mrazkova who also, together with her husband Vladimir Remek, published Another Russia: Through the Eyes of the New Soviet Photographers (1986).

In my perception, the photographs that were tinted usually just shifted to another level, became self-sufficient and required no black-and-white original."

The photographs included in this book leave the impression that life was easy, joyful and even erotically charged. How does this relate to the everyday reality of that time?

For me, life was okay but I can’t speak for the rest of the USSR. Everyone had his or her own experience. The Soviet government didn’t disturb me: I stayed away from it and it didn’t interfere with my business. I tried to avoid working with erotica because I was slightly embarrassed (although Sergey is way more relaxed about it). Frankly, I don’t believe my work has anything to do with sexuality. What you see in the book is probably the only erotica in my entire oeuvre.

It’s not that I had no opportunity to photograph someone nude, but in the Soviet times, everyone was careful about photographing nudity. As an artist, you could have put the naked person in your picture in real trouble, when recognised.

Do you think that contemporary Ukrainian artists have more creative freedom than you and your colleagues had back in the day?

I am not familiar enough with the present situation in the art world, but I think the perception of freedom is personal from one artist to another. When Boris Mikhailov visited Kharkiv after he moved to Berlin, he said that only in the Soviet Union we had complete creative freedom because elsewhere in Europe everything is commercialised. In the USSR, we could not make money with art photography, and it remained amateur, but at the same time, our connections were built on friendship and our photography on feelings. We presented exclusively private work that didn't have any political statement.

Despite this, in the contemporary art world, we – and every artist who lived during the Soviet times – are stubbornly attributed to some rebellious groups and movements.

In 2019, 'KOCHETOV' won the UKRCONTEMPPHOTO Award and was designated the book of the year.

*The photography hand-colouring process was also used by Boris Mikhailov in his series 'Luriki' from the late 1970s. Luriki became an underground method of hand-colouring black-and-white photographs with the purpose of making the beautiful even more beautiful.