Interview: The World According to Roger Ballen

‘The World According to Roger Ballen’ (Thames & Hudson, 2019) features photographs selected from across Ballen’s career, along with installations created exclusively for an exhibition at Halle Saint Pierre, Paris, last year. The exhibition closes on July 31st, 2020. The book, co-authored with Colin Rhodes, includes photographs of objects and works from Ballen’s own collection of Art Brut or 'outsider art'.

GUP magazine has reported extensively on Ballen’s career throughout the past ten years. In this interview, in which he often refers to himself in third person, we mainly asked him about latest projects and future prospects.

Halle Saint Pierre, where ‘The World According to Roger Ballen’ was exhibited, is a museum devoted to outsider art. What is ‘outsider art’, exactly, and can you say something about your own collection?

There are several ways to define outsider art and its relationship to Art Brut. The museum of Halle Saint Pierre gives way to people who don’t have any relationship to the art world. They do art because they like making it. Their work is a purely spontaneous experience art. Outsider art could, therefore, be thought of as ‘art created outside of the centre of the art world made by people living and working on the periphery’. 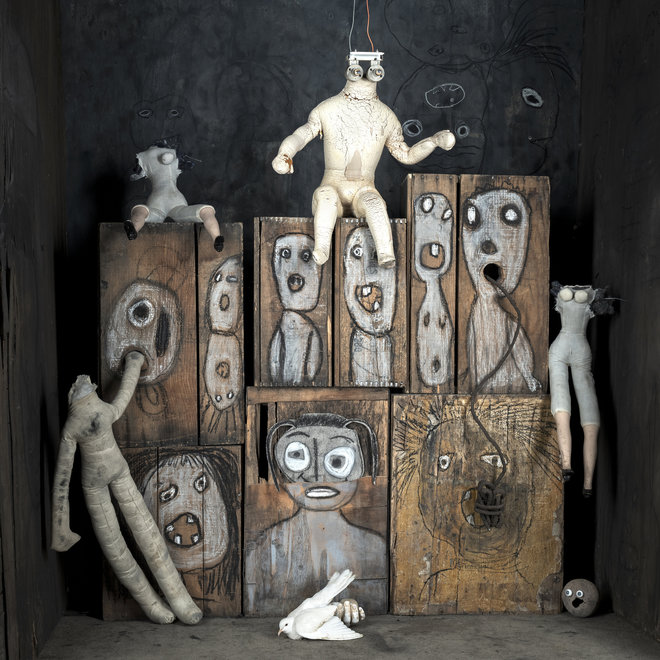 Are you an “outsider” or rather an insider within the “outsider culture”?

When you consider my work, I am not an outsider artist. I am an international, well-educated artist. But the people I work with are so-called part of marginalised society. But more important, I think, is that my work takes you to the other side of your mind – I focus on emotional states, a place that people tend to peripheralize, marginalize and avoid.

The aesthetic surrounding the individuals that I work with in the last fifteen years or so reflect metaphoric concepts related to human condition. This is clearly revealed in the last three projects, namely ‘The Asylum of the Birds’, followed by ‘The Theatre of Apparitions’ where I photographed the invisible and I made it into a visible spirit world. The last project that is not public yet is about rats. Rats are common as animals but also part of the so-called ‘outsider mind’, as they scare people and make them insecure. They create a lot of anxiety among the people in the western world as they symbolize a state of chaos.

(...) my work takes you to the other side of your mind

For those who did not see the exhibition, can you please shortly explain the elements which it contains? How was it structured and what were the main ideas behind its installation?

The exhibition is called ‘The World According to Roger Ballen.’ Thames & Hudson published the book and it was produced in both French and English. The exhibition is multi-dimensional and contains drawings, seven or eight major installations, videos and part of my Art Brut collection. This is mostly contained in the downstairs part of the museum which does not involve much of photography.

Upstairs is the photography part of the exhibition, which is divided into different sections dealing with people, animals, wires, the real versus unreal boundary, and color. The idea was not to focus on the photography I produced over the years, but rather getting into various themes that are central to my work for the last twenty to thirty years. The important point is that all these different media types of work originated from photography, since it has been at the core of what I have always been engaged in for over fifty years. 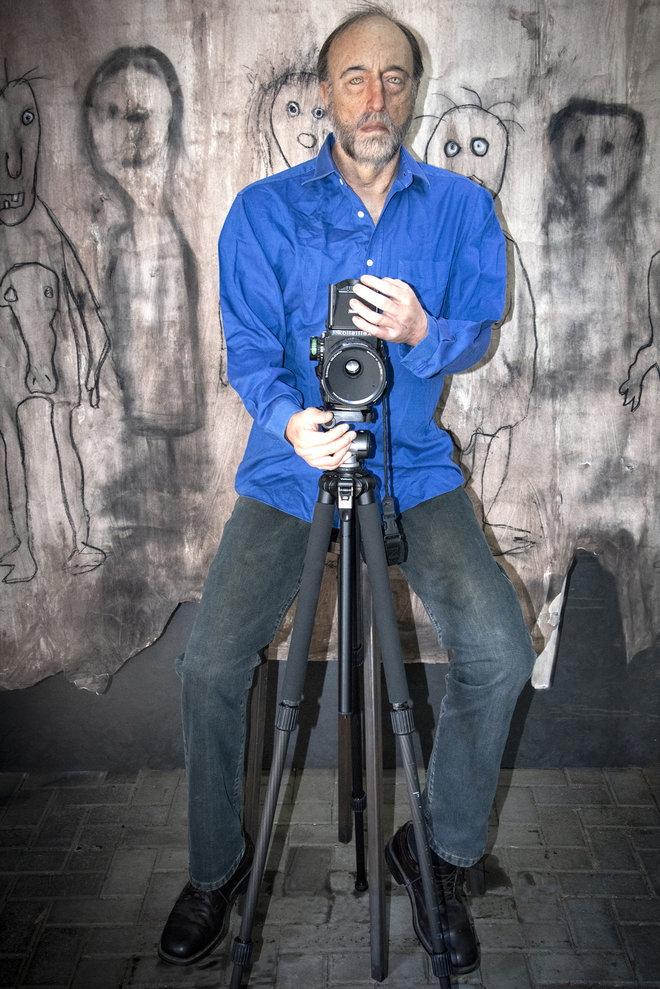 (...) all these different media types of work originated from photography

In the exhibition, there was also a sculpture of yourself holding a camera and spinning around (‘Roger in his World’). Its operation might remind of a panopticon. Could you please elaborate on this piece?

In the downstairs space there is a Roger Ballen spinning around, making it impossible to escape my essence in some way or the other.

My work is, essentially, a psychological experience. It’s not about the people or the place. A lot of photography is not about the psyche, it’s about documenting things and my work has surpassed this point a long time ago.

Back to the book. Colin Rhodes, an expert in the field of ‘outsider art’, suggests in an introduction to one of the chapters that your work could be understood as ‘carnivalesque’. Would you agree with that? And why (not)?

The word carnivalesque has a lot of philosophical history to it so it depends on how you define the word. In a way, my pictures take you to a world that is carnivalesque, an experience that is non-verbal.

There is a sense of absurdity in the carnivalesque. I think what Colin was trying to say is that people make carnivals, theatres in order to get out of themselves. Since they are defining and revealing the other side of the self, they are then becoming something that they normally aren’t, and they are expressing deeper layers within themselves to experience the carnivalesque.

I am not documenting people in different costumes and their ways of expressing themselves. It is more about the notion of the ‘Ballenesque’. In the Ballenesque is the carnivalesque. You know, the concepts are tied up in some way or another.

In the Ballenesque is the carnivalesque.

The important part of the Ballenesque is that the concept makes it hard to distinguish between the real versus the unreal, fact and fiction, Roger’s mind and your personal experience. There are all these enigmatic lines that run through my imagery and that is one of the reasons why photographs have an impact on people because it creates uncertainty. The uncertainty creates anxiety about your own state of being.

Do all the people on the planet think about the same things? I think so. Am I really real? What is this life about? Is this all a dream? And before you know you die. My work creates this type of subliminal anxiety in people’s minds. 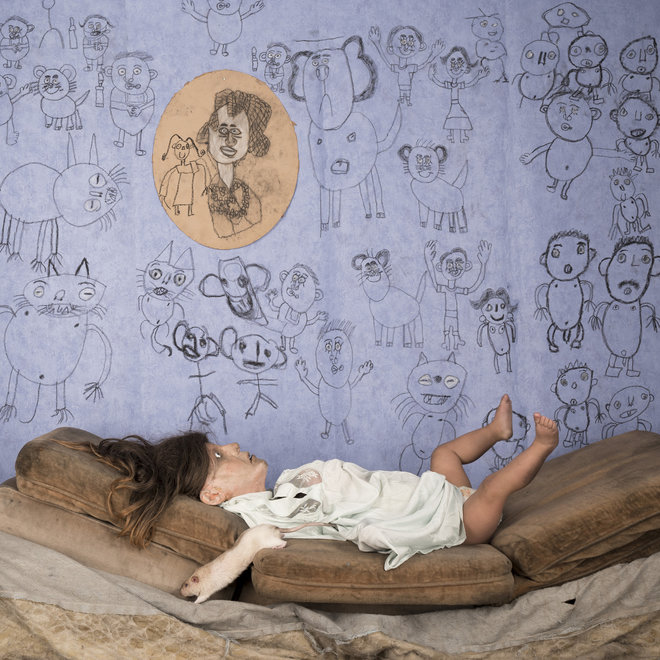 The uncertainty creates anxiety about your own state of being.

One noticeable aspect of ‘The World According to Roger Ballen’ is that it includes before unseen colour photographs taken by your (long-time) artistic director, Marguerite Rossouw. In those images we see you situated in your own sets and installations - created for your black-and-white photographs. What made you decide to include these images?

The book has a multi-dimensional purpose. One, it is a catalogue. Secondly, it is a documentation of the so-called world of Roger Ballen which isn’t only his pictures, it’s the places he works in and what he does in these places – providing a sense of who ‘Roger’ is. In this way, it fills some gaps people might have about my identity. That’s why I thought it was a very good addendum type of book to my career.

And what do you think colour adds to your latest works?

I made a video when releasing the ‘Ballenesque’ book, using a Leica SL digital camera. I never owned a digital camera before. I started to take these digital pictures in colour and just by chance I began to see that some of them worked better in colour than in black and white. At first, I couldn’t believe it. This process really inspired me to continue to use a digital camera over my Rolleiflex film camera. So, for about three years now I have been working on colour projects and I think the pictures are truly great.

This switch to colour has been a very important point in my career and it just happened by chance. It has opened a whole new zone of my photography, which I never expected. It was like winning the lottery, something you would never expect, and it had an impact. 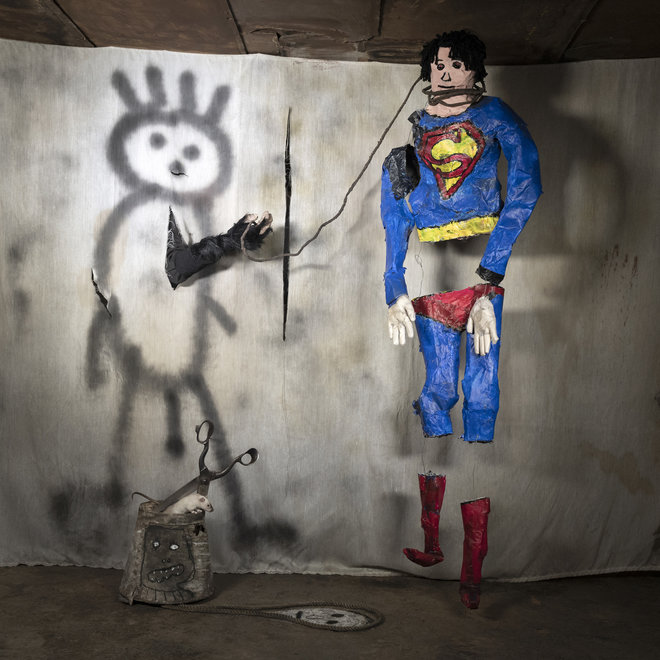 This switch to colour has been a very important point in my career and it just happened by chance.

As mentioned, the book includes new installations created specifically for an exhibition at the Halle Saint Pierre, Paris. How do you see the relation between sculpting these sets and creating a book?

There is a huge difference between creating a book and an installation. A book has a different rhythm. The images together with the text are almost like a cinema.

The problem with so-called staged photography or installation is that you make something and then you photograph it, which doesn’t feel like a real situation. A lot of times people make staged installations they try to portray that it happened, in real, but you can see that it has been artificially created. So, it’s a very difficult line to cross; between something that feels authentic and between something that is staged.

When people stage something, it often feels like it is fake. For me, during the process of creating installations as well as photographs, it is important to make them believable to the subconscious mind.

Now, almost twenty years since the first edition of your seminal publication ‘Outland’ (2001), what level of understanding of the darker side within yourself do you feel you’ve reached?

There’s a point in everybody’s life when you can’t break through certain things and you realize you never will. Important questions will remain unanswered. There’s nothing wrong coming to that position. That’s a good point to be.

You’ll have to face yourself, work with yourself, try to find yourself and keep doing it every day. My photography is about moving in that direction. I always tell people that I am very lucky because I have the camera to do this. Many people have the inclination, but they don’t have the means.

You’ll have to face yourself, work with yourself, try to find yourself and keep doing it every day. 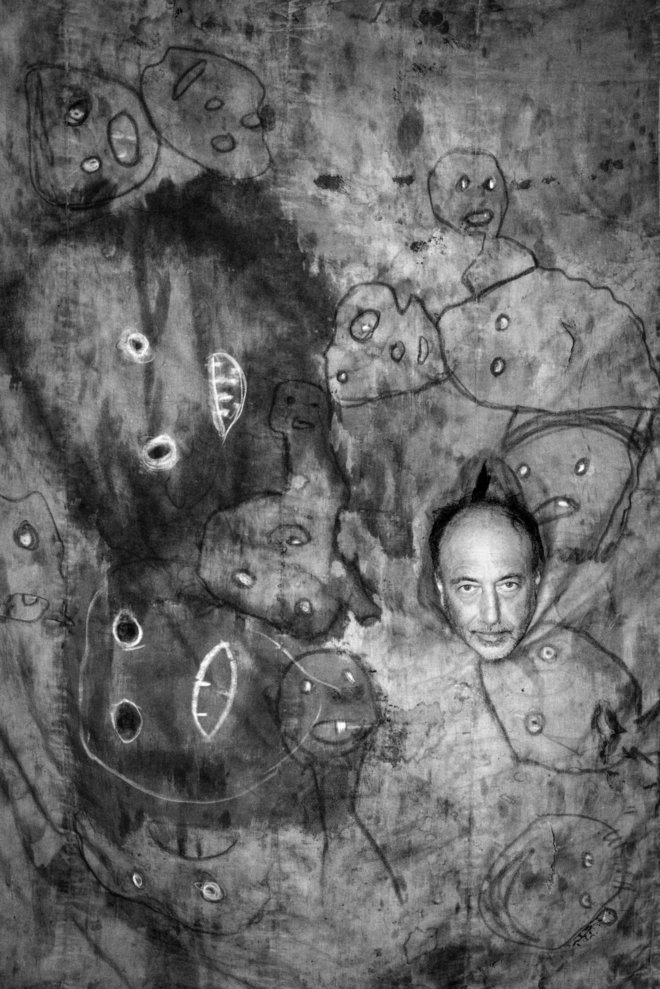 You’ll turn 70 this April. Any idea how much further you need to travel, artistically, to complete this existential journey?

Nobody can predict the future so I don’t know what I will feel like tomorrow. I don’t even know what is going to happen in an hour’s time. If you focus, are committed and feel passionate - with that state of mind, a vision might come to you. That’s the way it is. If you’re not really focused or interested, then it just won’t come. You need to be persistent, disciplined and work hard.

Additionally, you’ll need some innate genetic skills as we can’t be good at everything. We all have certain strengths and weaknesses. For instance, I don’t have a good ear so I wouldn’t be a good musician. I also don’t have a good sense of smell, so I would probably not create perfume. So, there are certain things that I am not good at, but the important thing is to concentrate on the things that you’re good at.

If you’re not really focused or interested, then it just won’t come.

Thereby, I can’t predict what will happen or what won’t happen because I don’t know. I really don’t. I’d be fooling myself if I knew. But I am very open to experiment and try new things, that’s been my personality for many years which is not going to change. Unless something strange happens. You can get sick or injured. Things can happen. You can wake up tomorrow with a heart attack, who knows? But if things remain equal, I hope to continue the same path - staying positive about what I do. That’s all you can do and say.

The exhibition is moving to Holland’s Fotomuseum in Den Haag in September 2021 and will be on show till January 2022.