Mafalda Rakoš: A Story to Tell, or: Regarding Male Eating Disorders

Mafalda Rakoš (b. 1994, Austria) is based between Vienna and Amsterdam, and recently graduated from the Royal Art Academy in The Hague, The Netherlands. Her work can be considered an intersection between art, documentary photography and journalism – a crossroad on which she stresses the themes of safety, pain and trauma. In her latest long-term project ‘A Story to Tell, or: Regarding Male Eating Disorders’ (conducted together with journalist Ruben de Theije) she explores the stories of eleven men who suffer from various eating disorders, such as: anorexia, bulimia and binge eating.

This project, including portraiture, drawings, videos and text, has meanwhile been exhibited at Nederlands Fotomuseum in Rotterdam and Kulturetage Altona in Hamburg. Now it is being moulded into a photobook which focuses on turning the protagonists’ complex experiences into a matter of relevance for all. Currently, Rakoš and De Theije are reaching their final phase: a crowdfunding campaign to cover the production costs of the book that is scheduled to be published in September 2020.

In an interview with GUP, Rakoš reveals her creative process and some intriguing details about ‘A Story to Tell, or: Regarding Male Eating Disorders’.

Prior to ‘A Story to Tell’, you focused on eating disorders of different women (‘I want to disappear’, 2013-2018). The reality of eating disorders is still very much stigmatized and often (falsely) associated with women only. What made you start working with men?

To be fair, I never thought that this topic would keep me busy for such a long time. Making and publishing ‘I want to disappear’ was a rewarding and intense experience, and also because of my personal background of being formerly affected by anorexia, I was happy to leave it at that. Nevertheless, my aim was always to deconstruct the image that eating disorders only affect young girls who “want to be thin” – the reasons behind it go much deeper than that – and quite often was asked, “Well, what about men?”, to which I always had to answer: “Yes, there are some, but I couldn’t find anyone to join the project”. Which was still true at the time.

So how did you eventually manage to find these men and how did the project evolve?

When I was playing with the thought of finding one or two men for the publication in a magazine, I sent a call through my already existing network of eating disorder organizations with whom I collaborated before, and was astonished: within one month, eleven persons got in touch with me and writer Ruben de Theije, who joined me from day one in this project and very much wanted to involve as many persons as possible.

It was clear from the beginning that everyone involved shared the intention to bring this topic to a wider audience, also if the context of their stories is very vulnerable, painful and intimate. Because of my already existing network and previous body of work, it was surprisingly easy to find them. All of our eleven protagonists were extremely clear on the fact that they wanted to share their story, they wanted to be seen – I really think that’s the fundament of this project, and why it eventually worked out so quickly.

When I started ‘I want to disappear’, it took me almost two years to find persons who were openly willing to talk about their experience and be photographed; and now, in less than two months, we had found almost the same number of protagonists within a group that is mainly characterized by its invisibility. That made us curious. What is it like to be affected by an eating disorder as a man? Even doctors, therapists, researchers and other specialists have difficulties answering that question. Without really realizing it, Ruben and I embarked into this new body of work that quickly started to live a life on its own and finally turned into my graduation project at the KABK. 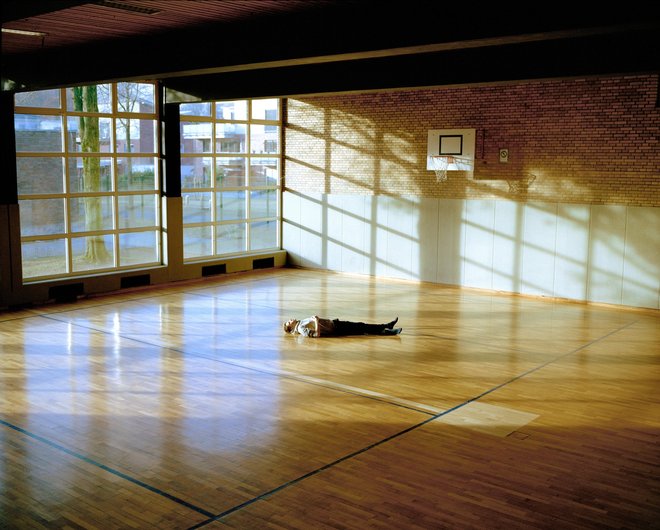 What is it like to be affected by an eating disorder as a man?

Male vulnerability is currently a popular topic in the field of photography and art in general. Why do you think it is an appropriate time to address such themes now?

I am also observing this trend and find it very interesting – especially because the eating disorder is so linked to one’s identity, specifically to gender and sexuality, especially with men. A major common theme were negative experiences in their childhood, and how many of them were being bullied by other kids because they didn’t fit the image of a “real man” or were somehow “different.”

Florian, one of our protagonists, summed it up: “According to society a man has to be tough: he isn’t allowed to show emotions, can’t be weak, can’t cry, has to be responsible. A man must pursue certain interests, like watching sports. I always had problems with this.”

It is important to mention here that gender was also a strong topic in my previous project with females. One of the most sensitive spots in my interviews with women was the question about their aspirations – what image did they have in mind when feeding their compulsive eating disorder behaviour? Almost inevitably, the concept of the “superwoman” was brought up – a perfect being who is: warming and caring, sexy, but also tough, ambitious, and focused on her career at the same time. No wonder that the contradicting features of this “role model” brought them into distress!

Luckily, I feel that especially in the past years, one can witness how our world is changing in that regard – and would say that paying attention to male vulnerability is in line with this overall process. With this, I mean the partial integration of fluidity and critical awareness of concepts such as “female” and “male” into mainstream discourses, which I perceive as a positive development. 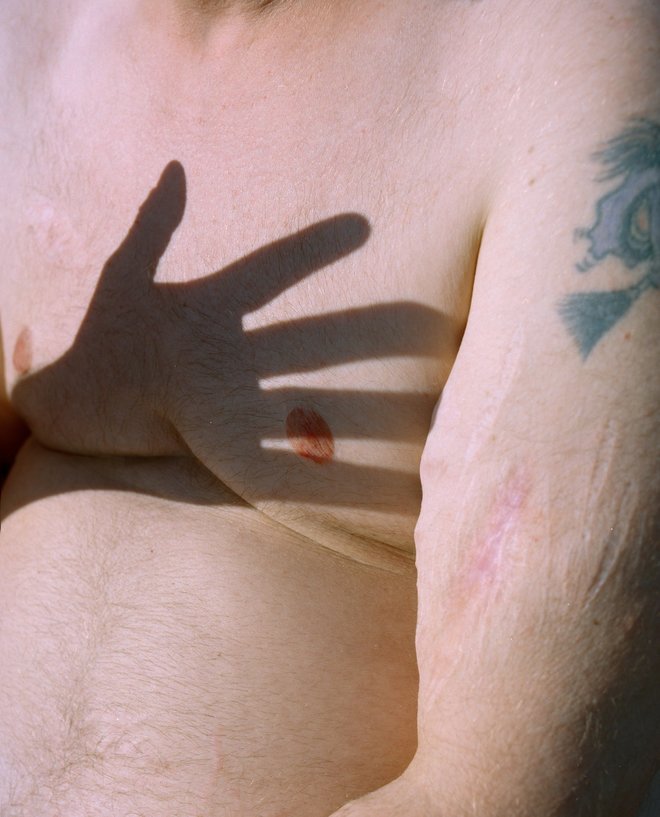 I would say that identity, one’s position in society and how to deal with fixed concepts, stereotyping, and otherness, has long been – and will continue to be – of major concern. Of course, we are still living in a modern meritocracy that strives for individual self-fulfilment and success, and technology and social media have a great impact on the development of beauty ideals and stereotypes, but somehow, luckily, also in deconstructing them (when perceived within the right bubble). So, they are also liberating in the sense that participating in global discourses is now more accessible to individuals than ever before, leaving for a much more diverse space for expressing oneself. 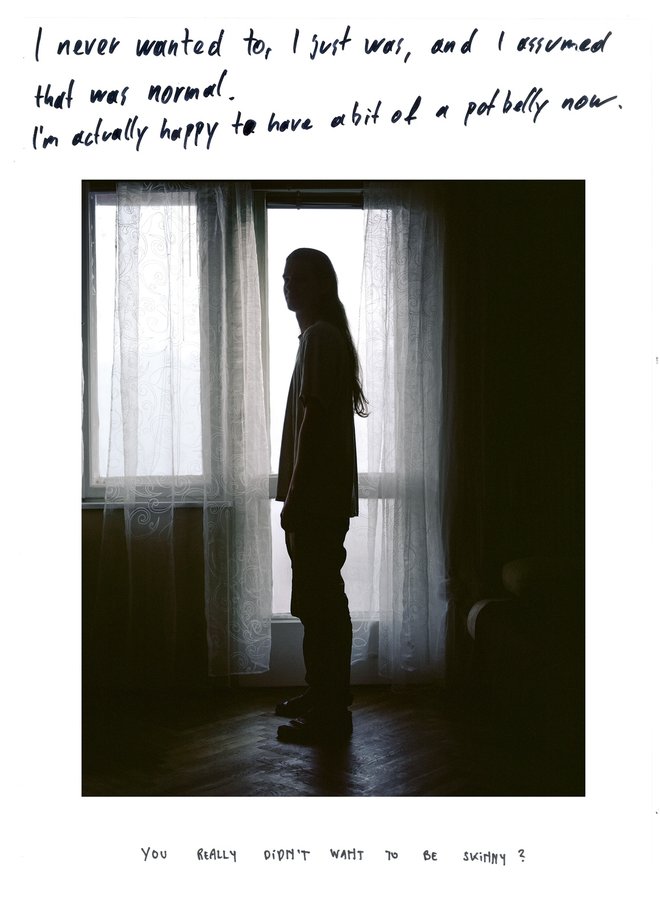 (...) technology and social media have a great impact on the development of beauty ideals and stereotypes, but somehow, luckily, also in deconstructing them.

Your project is a collaboration with journalist Ruben de Theije. How did you manage to combine your visions to make it work as a whole?

Refining the methodology and thinking about how to represent the experience of the illness through collaboration whilst keeping my own voice in it was crucial to the creative process. In this project, many people are collaborating. Besides Ruben, I worked with a videographer, a designer, and - last but not least - eleven protagonists.

How can I represent “the other”, how can I visualize a vulnerable topic without invading the personal space of the protagonist? Secondly, much more practical: the eating disorder is highly invisible (that’s the whole point of the project), many of our protagonists are recovered or not underweight (anymore) – how can I visualize their experiences? In this case, I decided to work a lot with drawings and handwriting. After taking portraits and environmental pictures with and of the protagonist, we always came back to ask them to react to their pictures by drawing on top of them. This process was guided with specific questions, a sort of drawing-interview.

In general, I aimed at constructing this project like one great interview. This idea comes back in the book, the exhibition, the texts, and finally also in a video work that I made together with Leroy and Florian, two protagonists from Hamburg. This piece was an important step in our project. It helped me to find my own position in this project – one which is certainly not being a professional therapist. This is, in the end, an art project. 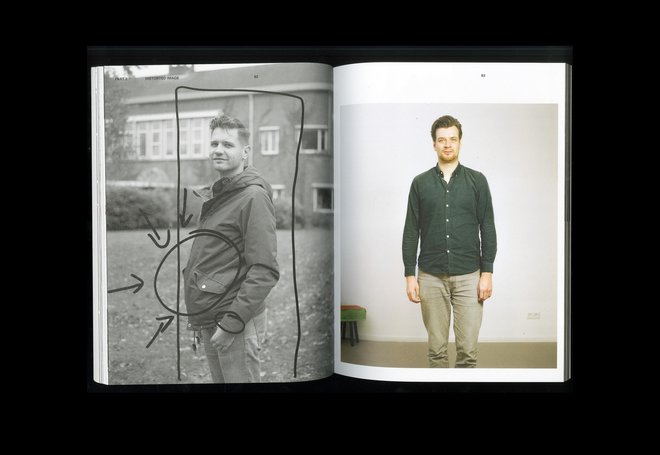 What would you like to achieve further, in regards also to the upcoming publication?

Great fuel for me always has been the idea to make an impact – and we think this can be done in the form of a photobook. Therefore, we’re excited to bring this project to its next stage, to print and publish it as a book which could help carry the message to a wide audience.

Ultimately, I hope that the book will resonate beyond our ‘photo universe’, that it will be widely received in mainstream media and eventually be known among those with eating disorders, or any psychological fragile condition – regardless of gender or identification. I hope that by doing so, we’ll contribute to address the stigma around mental health conditions and trigger greater societal self-reflection on normative concepts (like gender or even origin) and therefore make the world a little bit of a better place.

You can help support the current campaign of ‘A Story to Tell, or: Regarding Male Eating Disorders’ here.