Uncovering the Untold: An interview with Chloe Dewe Mathews

Chloe Dewe Mathews (1982) is a British documentary photographer who seeks to discover the unknown, an artist who travels with an open mind and therefore, captures refreshing and sentimental images from around the world. Interested in the relationship between people and land, her series Shot at Dawn focuses on 23 sites in France and Belgium where Allied soldiers were executed by their own regiment for desertion in the First World War, offering a new insight into a little known war-time atrocity. Other projects, such as Caspian, which portrays crude oil spas in the region, explore how we project attributes onto our environments and how this can change from culture to culture. In this interview, Dewe Mathews discusses the responsibility of tackling a loaded subject, the ‘other’ and being surprised by the world.

You’re known as a documentary photographer, but how did Shot at Dawn force you to change the way you worked?

Well, I suppose all my work is about the connection between people and landscape, and this was the first time in which the people involved in the story were so long gone. Each photograph, both in exhibition form and in the book, has a specific title – the names of the people executed there, the time of death, the location and date – so by seeing the image in conjunction with the text, the event is somehow conjured in the mind. The subject matter very much dictated how I made the work, but it’s still about telling stories, talking about people’s lives and what happened to them.

So you consider the images a sort of tombstone for the soldiers?

Kind of, yeah. It does act as a form of memorial, but I think because they’re very open images, neutral landscapes at dawn, that they stand in for that person, they represent them and what happened to them. Once the audience has seen the work, they’re also able to move on to all sorts of other questions, to do with war and conflict or their own relatives involved in WWI. There’s an openness, so it can stand in for a lot of different things, which I think has been the strength of the work in the end. 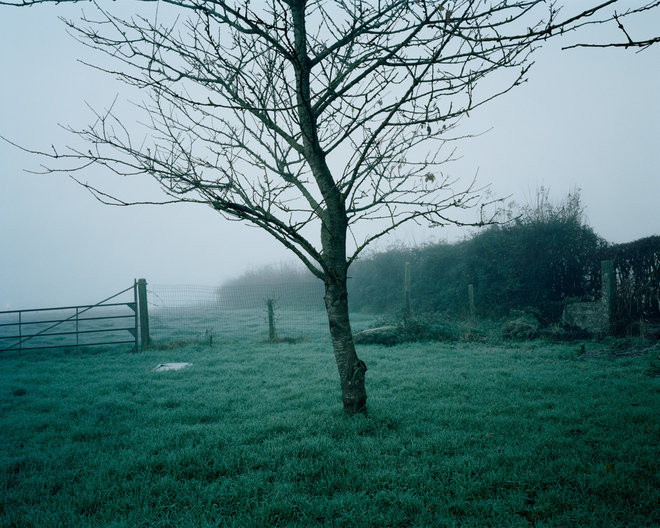 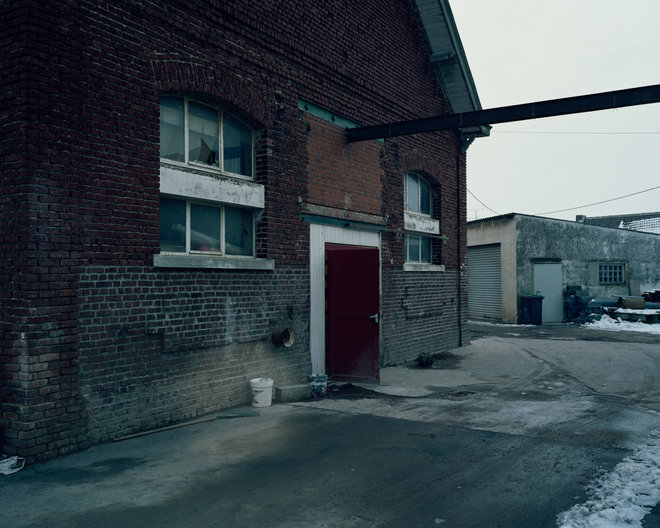 What led you to create the series, is there some kind of personal link?

No, actually, and this is why I was resistant to taking on the project in the first place. About two years ago I was commissioned by Oxford University to mark the centenary of WWI and I was really hesitant in the beginning, partly because I don’t have a family connection. So many stories have been told and retold so I wasn’t sure if I could contribute anything that would be new or important in any way, but at the same time, I was really intrigued. I decided to go on a research trip and if I found something of interest, then I would take the commission, but if I didn’t, then I would just leave it and they could find someone else.

So it was by going over to the Western front and trudging through battlefields and cemeteries, reading books and going to museums that I came across the story of these people who were shot at dawn. I found that so deeply shocking and felt as if their stories had been edited out of my learning about WWI as a child, somehow I had missed any references to them in any popular culture. That’s why I decided to start investigating, which led me to talk to all sorts of different academics: battlefield guides, military historians and local historians, all sorts of different people who had small amounts of information about one soldier or one execution. By combining all these bits of information, I was able to knit these 23 sites together. I made a photograph at the same time of day and year to represent what had been cut out of history for so long, to bring it to the public again in a visual form.

So, was it almost like a duty you felt?

I’m not sure I would call it a duty, but as soon as I took it on, I felt a sense of responsibility for the project. Each time, I present a photo of the place and a little information: it doesn’t include anything about what the person did to let the audience make judgements. They don’t know who did what, why they did it, if they were suffering from shell shock or in fact, if they deserted 4 times and were, for that reason, supposedly less of a victim. This means the audience engages in a similar way to those judging them at the time, with very little information and understanding. I’m also portraying each case in equal terms. 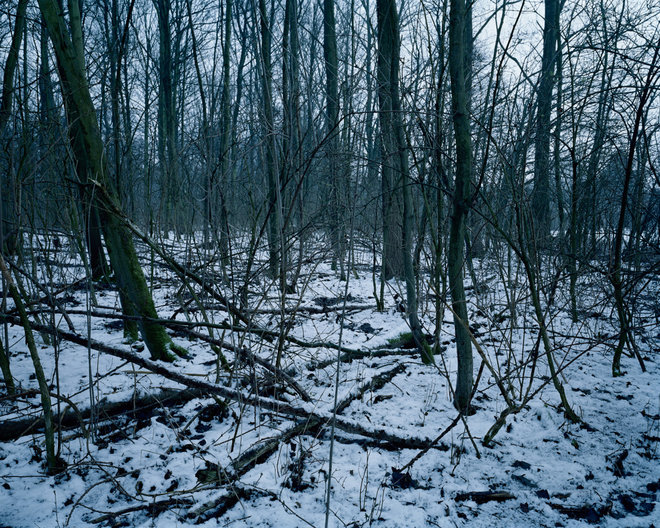 The images themselves are quite sombre, with the lighting and mist, due to the fact that the photographs were made at dawn. Was this a conscious choice or did it come while you were involved in the process?

I think it’s really hard to know whether they’re bleak just because you know what happened there and I could argue that had you not known what had taken place, some of them wouldn’t be. I shot them at dawn because that is when they were executed and the benefit or positive outcome of doing them all at that time gives them a coherence that makes the images work quite nicely together. The photographs were taken in Belgium and northern France and there are some places that have a particularly beautiful tree or something, but most of the surroundings are pretty mundane: the back of a church, or a yard with a wheelie bin in it. They aren’t remarkable landscapes or classically beautiful, but the dawn element, the morning light and the softness does create a certain atmosphere. I suppose it lends itself to people looking and contemplating, the business of the world isn’t there, so there is space to think when looking at them.

I don’t like the whole notion of the photographer, looking at other people and portraying them in a way that only adds to the sense of separation.

How closely did you keep to the location of the actual execution? Because it must not have been possible to know the exact place for every one?

That’s why I only have 23 locations. There were around 1,000 cases of people who were executed for cowardice or desertion, but there were so many cases where there was little or no documentation. Perhaps I would only know the village or someone would say, “I think it was over by so-and-so’s farm, but I don’t know where on the farm” and I wanted to be confident with the information that it was definitely in a particular place.

At first I was thinking about the victimhood of those who were court-martialled and how it happened, but quite quickly my thoughts moved to the people who had fought alongside them and who ended up in the firing squad. They had worked for months and years, being told the enemy was the Germans over the front line and then one day, they’re told the enemy is the person they’ve been working with. It was also important to bring that layer of mental confusion and huge stress to the project.

Because your photos are taken from the point of view of the firing squad?

Yeah, they basically are. It’s quite a well-used and well talked about idea of the photographer as shooter, which I’m not specifically interested in myself, but that’s what just came about by finding the location and wanting to document it. I found myself in the position of the firing squad and that was a strange process, because I wasn’t really thinking about re-enactment at first or the performative aspect of photography. Once you’ve set up 10, 15 or 17 times though, you realise you’re doing it in a particular way and you have your ritual, you see you’re repeating that pattern and creating an echo. 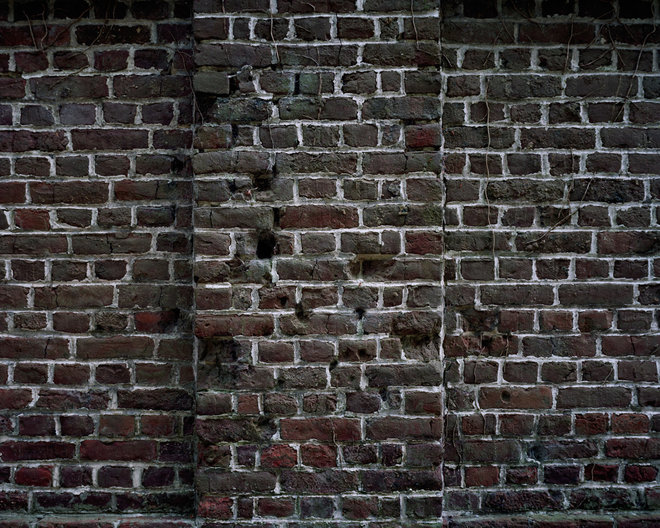 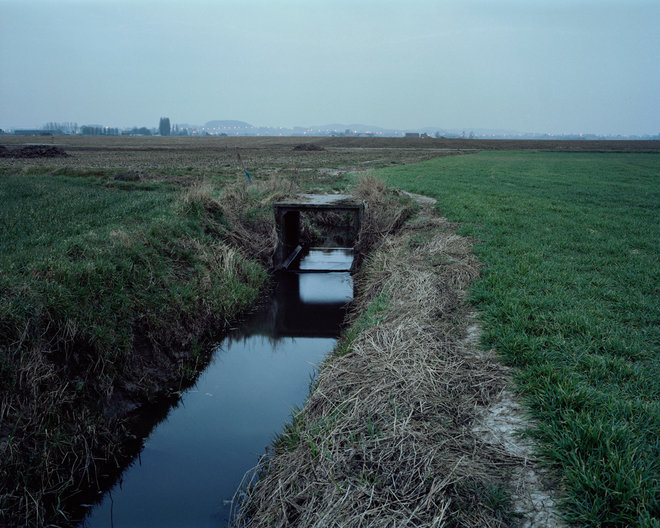 Some of your previous work has focused on characters who are stereotyped or misunderstood, such as Hasidic Jews. Do you aim to change perceptions on them in your photography?

Yes, I think that’s true. I don’t set out to do that, but I am drawn to it. I don’t like the whole notion of the photographer, looking at other people and portraying them in a way that only adds to the sense of separation. In my series Hasidic Holiday, I was trying to show the Jewish communities on the beach in Aberystwyth, having fun with the families and not make them seem strange and different. Part of my interest in working with different communities is because you do see difference, but you also see similarities, relating to them the more you get to know them. 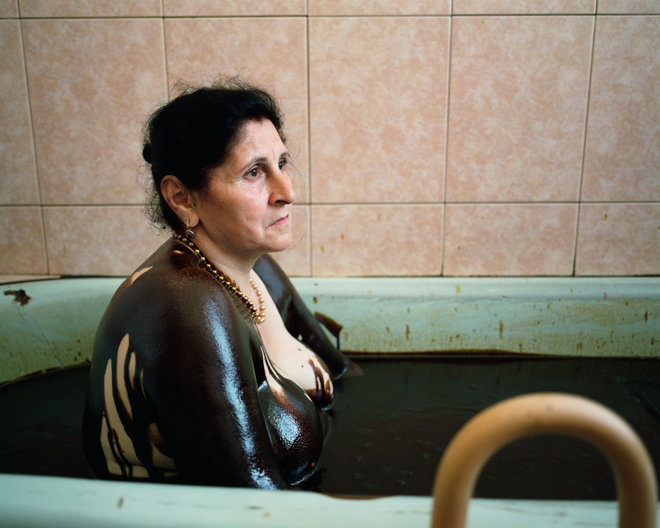 You have a book coming out this year, from your Caspian series, is that right?

Yeah, I’ve been working for the last five years on this project, which started by chance when I was hitchhiking through the region around the Caspian sea. At the beginning, I went with the idea that I wouldn’t plan what I was going to do, that I would be very open and as I went along, I found my area of interest. It’s about people’s relationship to land, natural resources and how we project meaning on to those substances. One person may bathe in crude oil as a health remedy and someone else utilises that same substance for industry. So it’s become much more refined and more narrow in focus as the project has continued.

Then I got a fellowship from Harvard called the Robert Gardner Fellowship in Photography at the Peabody Museum and that has funded the last year’s work of completing the project. I’ve just been in Iran and Azerbaijan to finish shooting and working towards an edit and then putting the book together for release this year, which Harvard will co-publish with an art publisher. So, that will be really exciting to have it out, it’s been a long time in the making, as many things are.

Is that normally how you work, by just going and seeing what happens and creating a focus later?

Yes, I like to because it’s so easy to just make assumptions and if you do that then you’ll never learn anything. I think part of my interest in documentary photography is about being surprised by the world. If you go into a project already with an agenda, you often miss the most interesting things that are happening. Of course, I can’t help but have certain preconceptions of a place, but if I try to go with an open mind in the beginning and keep trying to reset all the way through, then I end up getting the most out of it. That way I can create something that feels truly engaging to me, rather than just glossing over the same old stuff.

Shot at Dawn is currently on show at the Irish Museum of Modern Art until March 28, 2016 and will then move on to Ivorypress, Madrid in May. The accompanying publication is available to purchase online.