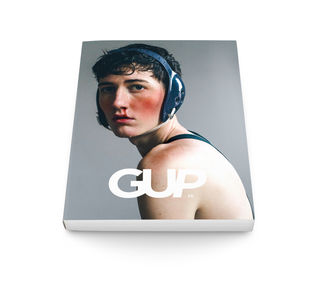 Max Pinckers (b. 1988, Belgium) makes mysterious scenes alternate with equally curious characters. Stories are told by means of quotes, newspaper snippets and found images, but the overall question remains: is this arriving from reality or is it fiction? In Pinckers' work there are no easy answers and things remain unsolved, if only to address the contemporary social realm in which pure lies, half-truths and the imaginary are seemingly all of equal value.

Margins of Excess tells the stories of six people who gained short-lived notoriety, for they were denounced as frauds or deceivers by the American press. Herman Rosenblat invented his own love story set in a WWII concentration camp; Jay J. Armes presented himself as a real-life superhero. Pinckers presents their stories not only through press material, but also staged photographs – to address the intricacies of truth; to raise awareness to how, in our day and age, subjective beliefs are presented as generally accepted (historical) facts.

In his newest project, Red Ink, Pinckers deals with the theme of fictionalised reality once again, this time photographing a different kind of staged scenario: the city of Pyongyang in North Korea. In August 2017, Pinckers was sent on assignment by the New Yorker with his assistant Victoria Gonzalez-Figueras and American journalist Evan Osnos to capture Kim Jong-un’s regime as the tension with the US were growing to a frightening level. This journey resulted in a collection of images portraying the manufactured version of reality he was shown on arrival. Through the bright light of a flash, Pinckers highlights the artificial essence of the locations he was taken to visit, creating an aesthetic that reflects the propaganda tools employed by the North Korean government.

A Highlight of Margins of Excess appears in GUP #58: Delicate